Psychic VR Lab was founded to make all humans awake their psychic power with VR.

Our life has been changed dramatically by the advancements in technology. We introduced technologies as a part of our daily life and augmented our capability so that we improve our quality of life. And, now, we have gained a new ability by the arrival of VR / MR technology, which requires us to update our perception, philosophy and way of life.

VR / MR and AI technology have made us step in the future that eliminate the barrier between life and machine, self and others, and even between life and death. We, Psychic VR Lab, would like to unlock the human capability with the technologies based on VR / MR, and play a role to evolve all humans in the history.

Virtual Reality: The place of three-dimensional expression to free our inner world

By the VR technology, we have become free from various limitations spacially and physically, which allows us to have a place where we express our inner world with our free ideas. Psychic VR Lab will unlock the power of expresser’s imagination and play a role to show the expressed world to everyone.

Mixed Reality: a bridge between human and conscious entities

The advancing AI technology would bring us the daily life with a few millions of conscious entities. MR devices would give the AI-driven consciousness to things so that the relationship between human, reality and things will change dramatically.

In addition to spicing up the real world and providing an interface in space, MR will be able to become an important bridge (OS) between every conscious entity and human.

If one billion people in the world used VR / MR for 8 hours a day, the total amount of the time would become to about three trillion hours in one year. A new layer overlapped with reality will be born in the market. It means we will have a new huge infrastructure that doesn’t consume our disposable time.

We are about to realize the world where people wear a space by STYLY. After the introduction of WALKMAN, we began to go out to the town with music. After the introduction of iPhone, we began to go to society with a computer. We realize the world where many people simultaneously live a multilayered world with reality and virtuality overlapped, wearing a space as a part of their body like clothes and as a new fashion to spice up their lifestyle.

The logo of Psychic VR Lab with mixed black-white colour and square-circle shape expresses the future image of melting and disappearing boundary between two extremities of a concept, such as ‘Reality and Virtual Reality’, ‘Life and Machine’, ‘Life and death’, ‘self and others’, by the advances of technology. 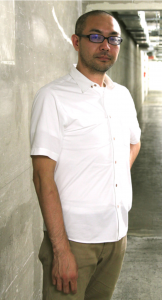